When you live on the "Rock", a 13 mile long island, known as St Thomas, US Virgin Islands, you get what we call "Rock Fever". This fever is brought on by living on an island that does not have the many amenities that you would have living stateside. Some of the amenities that I miss include, Taco Bell, Costco, Super Wal-Mart, 4 lane divided highways and going over 35 MPH and different cultural foods. This is not to say that I don't love what we have here in St Thomas, it is just wanting to get a fix!

Well when I was selling timeshares at the Marriott (yes sadly I do not work there anymore and back to being a full time real estate agent!)we got special employee rates. When I worked at the Marriott, I would only get a full weekend off every 4 weeks as they had a rotating schedule (hence my demise there), but found one in January. You see my wife works at a normal job, Monday-Friday. And with my luck, there was a discount room rate at the Ritz-Carlton near San Juan, Puerto Rico, on Isle Verde. $125/night. Now getting there to Puerto Rico. It is 70 miles to San Juan. There really isn't any ferrys. But, we do have flights there, American, Jet Blue, Seaborne, Cape Air and Air Sunshine fly there. Good news, I had a $200 voucher for American that they gave me from a past flight for screwing up my seat upgrades. American had flights for $69 each way! Now when we get there, a rental car, Hertz to the rescue, $14.99/day!

We flew into San Juan on a Friday night. The 30 minute flight was exhausting. First stop after getting our Hyundai rental car, Bebo's BBQ. This is a road side stand with only outdoor seating. Yelp gave this place great reviews and I am always up for a hole in the wall where the locals eat! It took some time finding it. Got there and about 10 people in line to order. And they did not speak any English so with my 3rd grade Spanish and some pointing we got BBQ chicken and Pork with a side of rice and peas and yucca. We got it to go and brought it with us to eat at the Ritz! Classy right?

Next stop was the grocery store for some bottled water and beer. I had to get my hand on some Medalla Lights, the Puerto Rican favorite. We went to a Pueblo Market, which we have here in St Thomas, but the one in Puerto Rico resembled more of a stateside grocery store, than the third world ones we have here?

Now off to check in at the Ritz. Um yea, $17/per day to park? Check in was good with a glass of champagne (as I am standing there with my hockey bag of beer, a cooler and Beto's BBQ). Front desk gal could smell the BBQ and we told her Bebo's, her favorite, lives a couple of blocks from there.

Up to our room on the 8th floor facing the airport (oh no, yes Ken will be staring at the planes taking off and landing all day). We requested our fridge to brought to our room, we need to keep our beer cold! 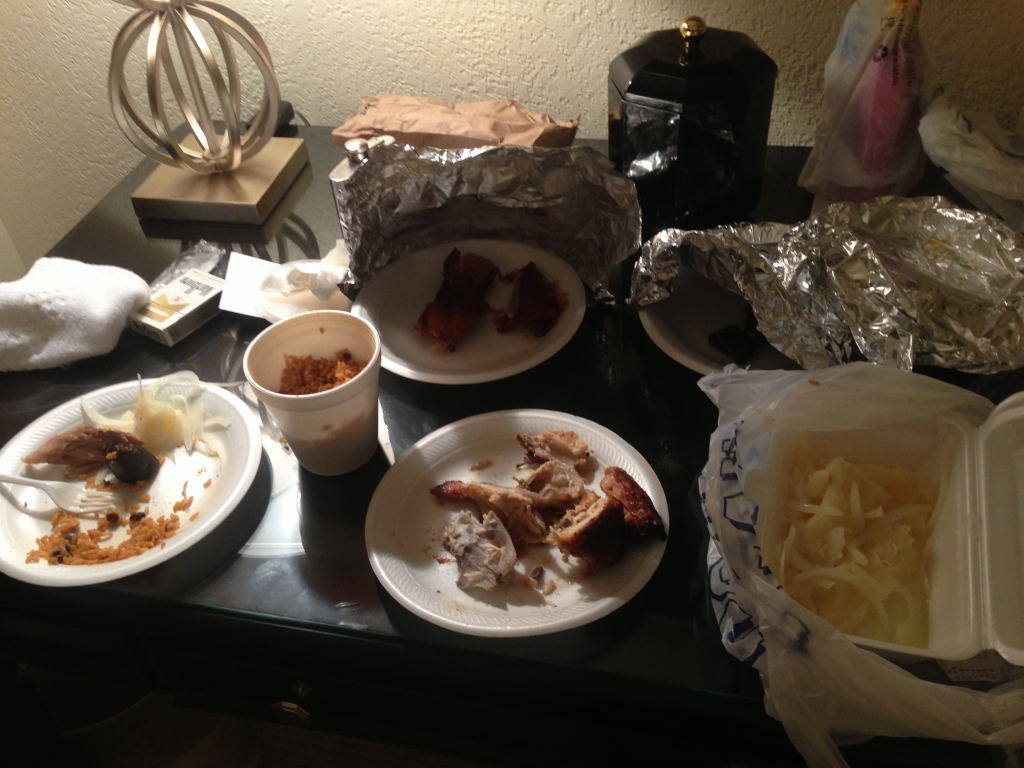 Very good!  Now for a walk around the resort.  They have a full service casino, but after living in Reno, NV for 8 years, not interested. Off to the pool and beach! Nice pool area, but at night the gate to the beach is locked at 8PM?  Safe area?

After a good nights sleep we ventured out to the Isla Verde area. Late start and after much debate about where to go for breakfast we ended up at Taco Bell for brunch! 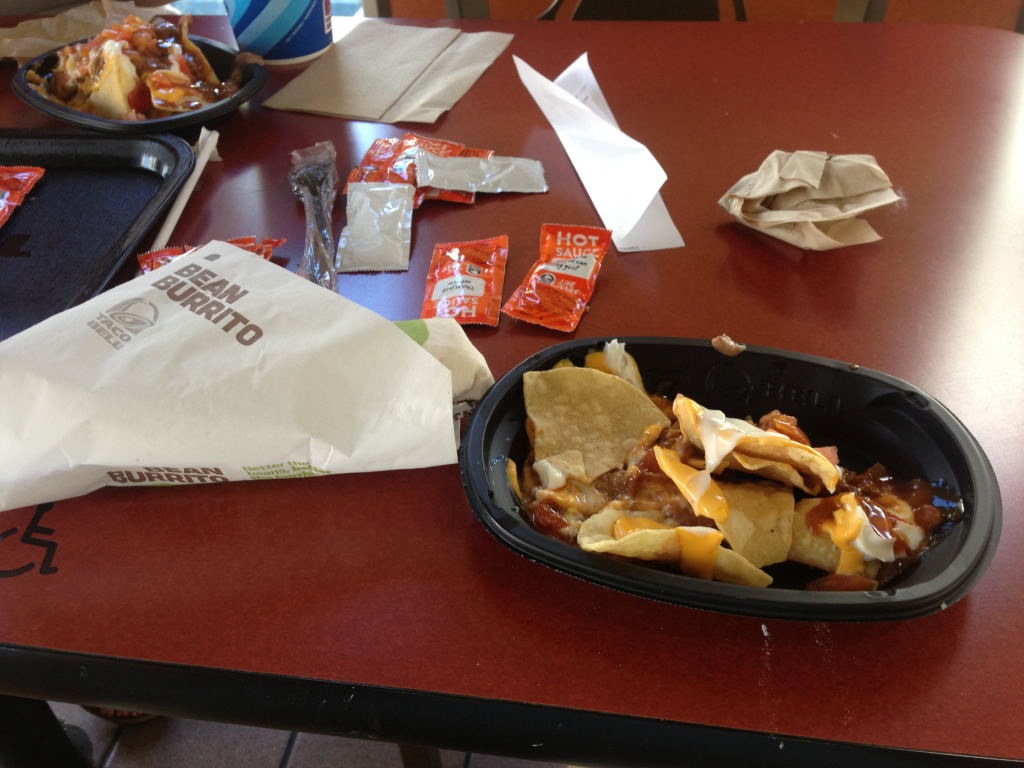 Now off to the beach and pool at the Ritz. The beach in Puerto Rico is more of a yellow sand, rougher water and high rises right on the beach?  Seemed more like Florida or Jersey shore to me? 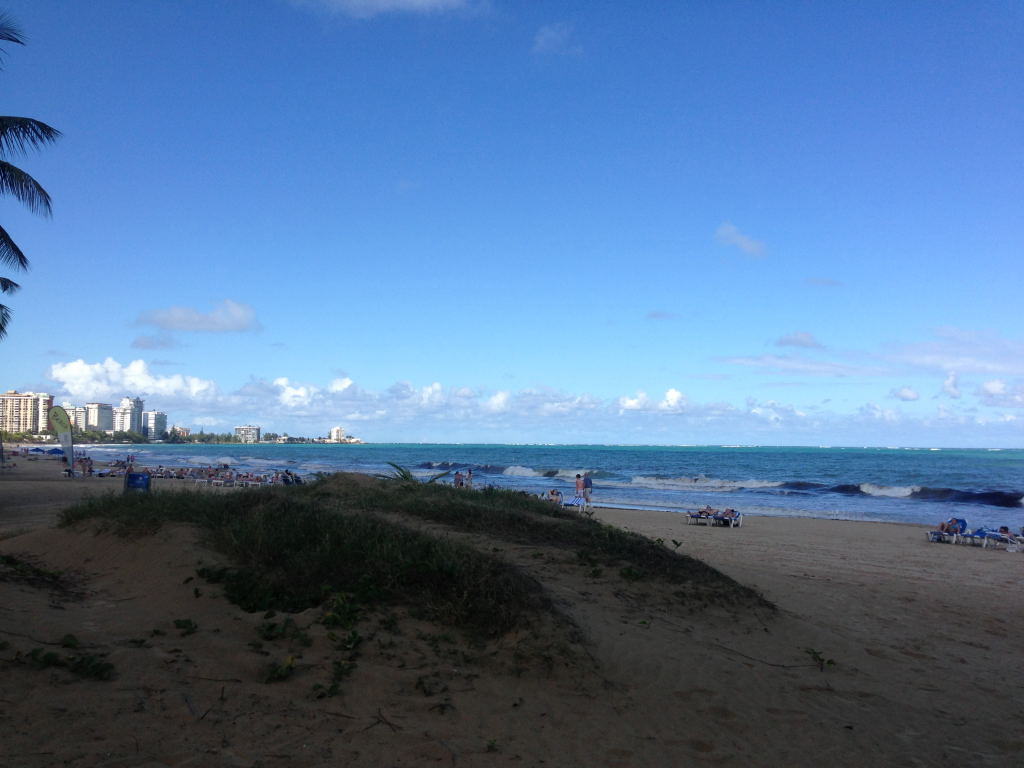 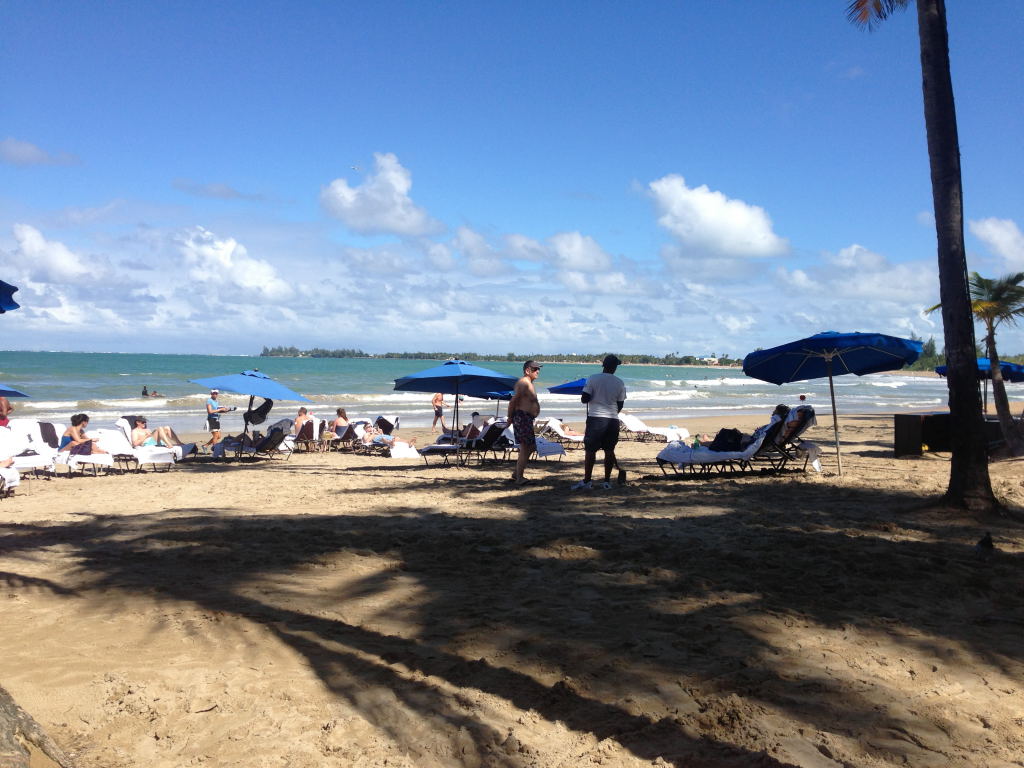 Hmmm, here is a picture of our beach on St Thomas of Megan's Bay, which do you like better? 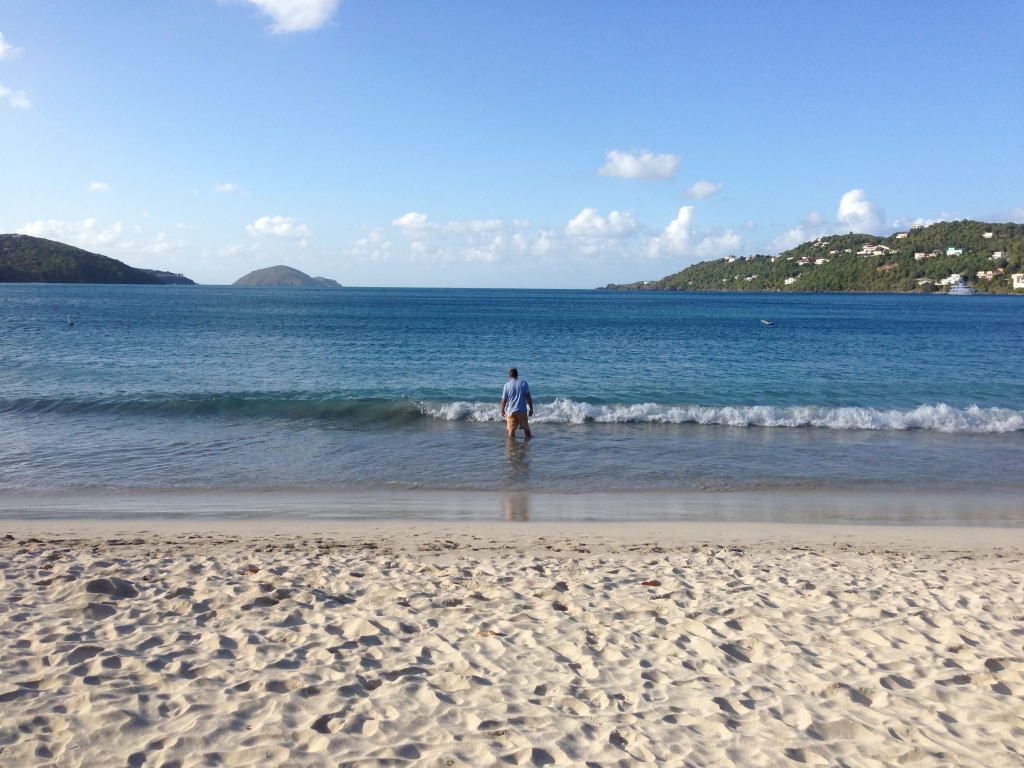 Of course being frugal, I brought a cooler of Medalla Light to the beach! 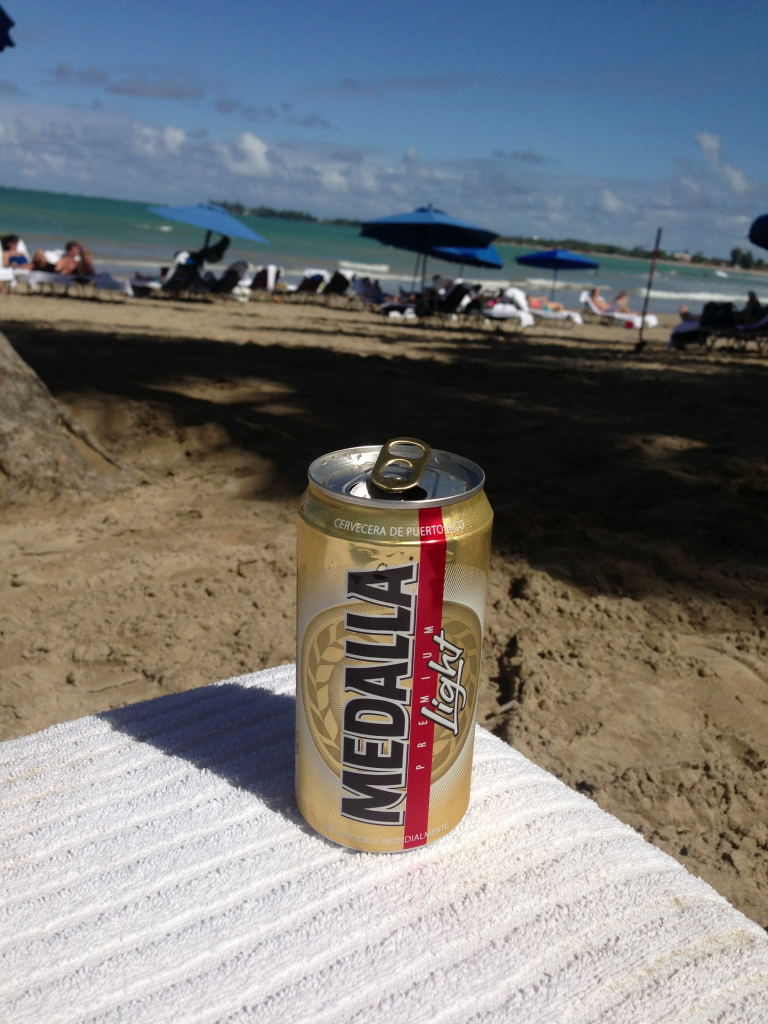 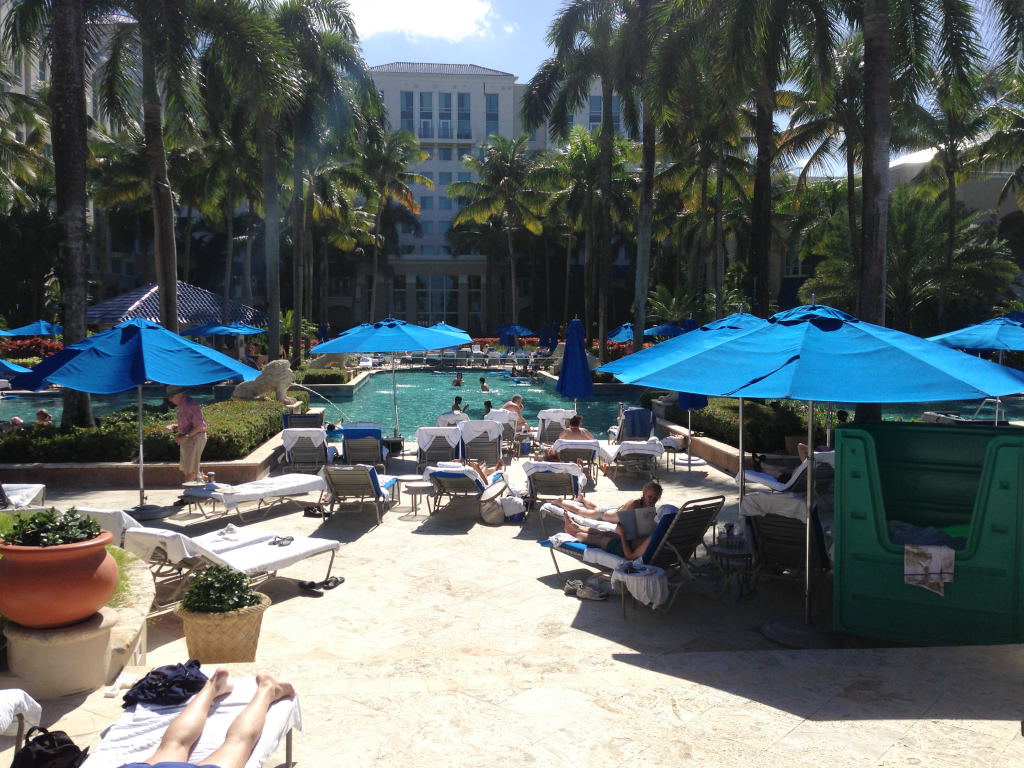 San Juan was neat place with old forts from the 1600 and 1700's. Narrow streets with outdoor cafes and shopping, lots of it. Too bad I am not a good shopper? 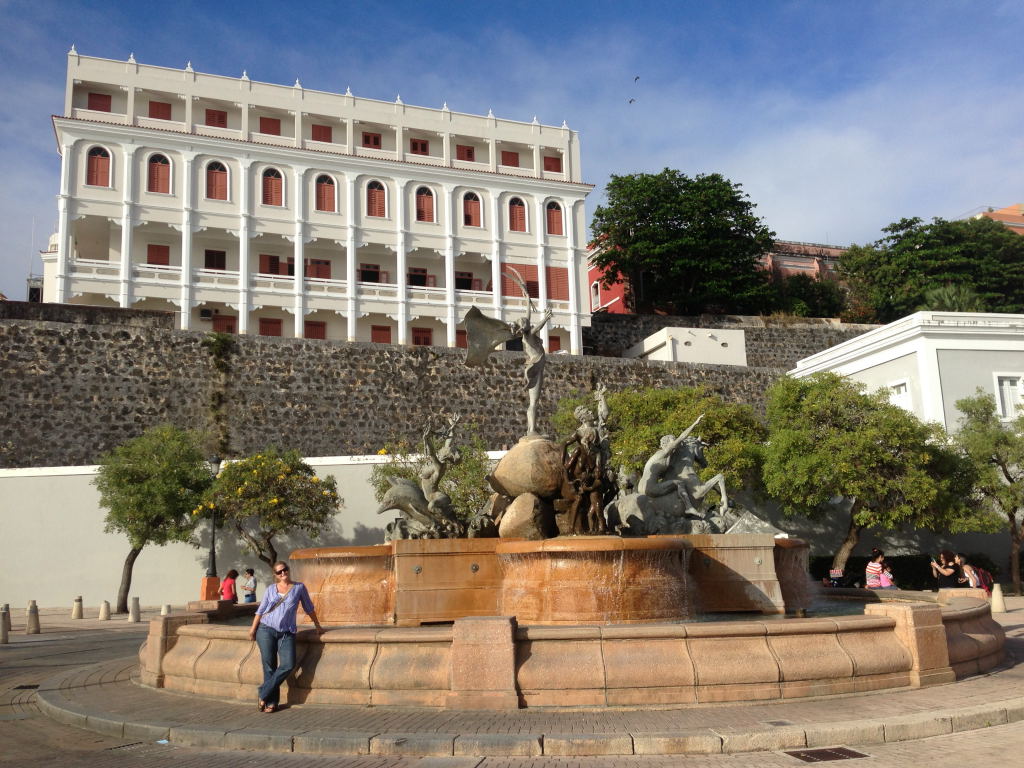 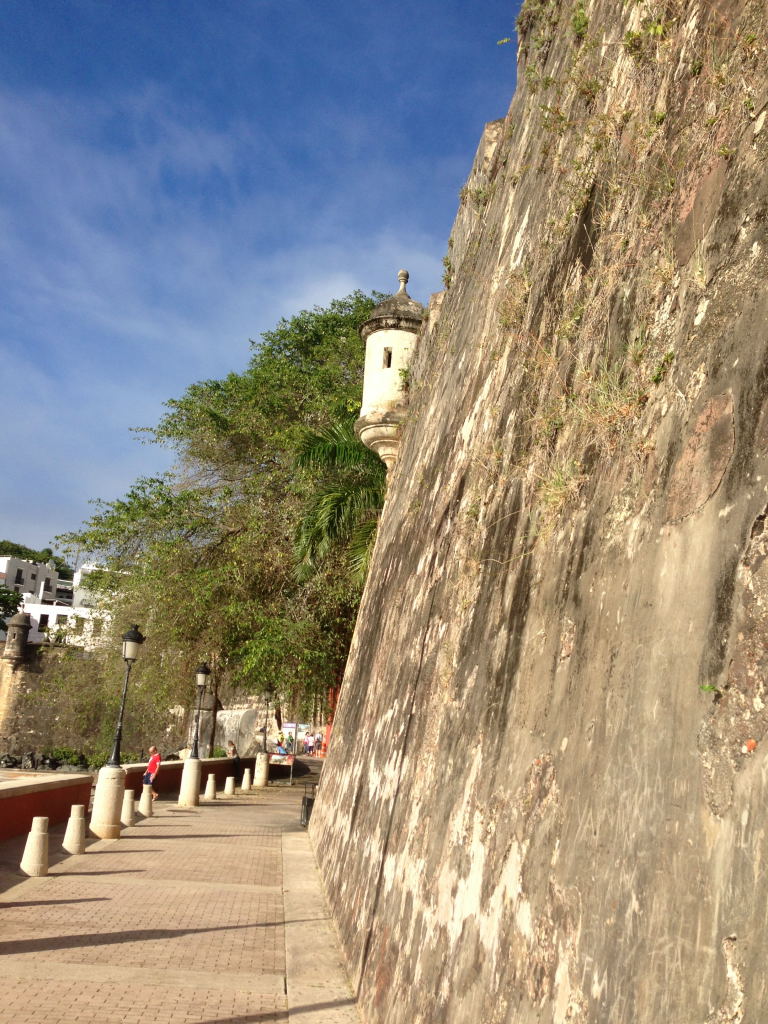 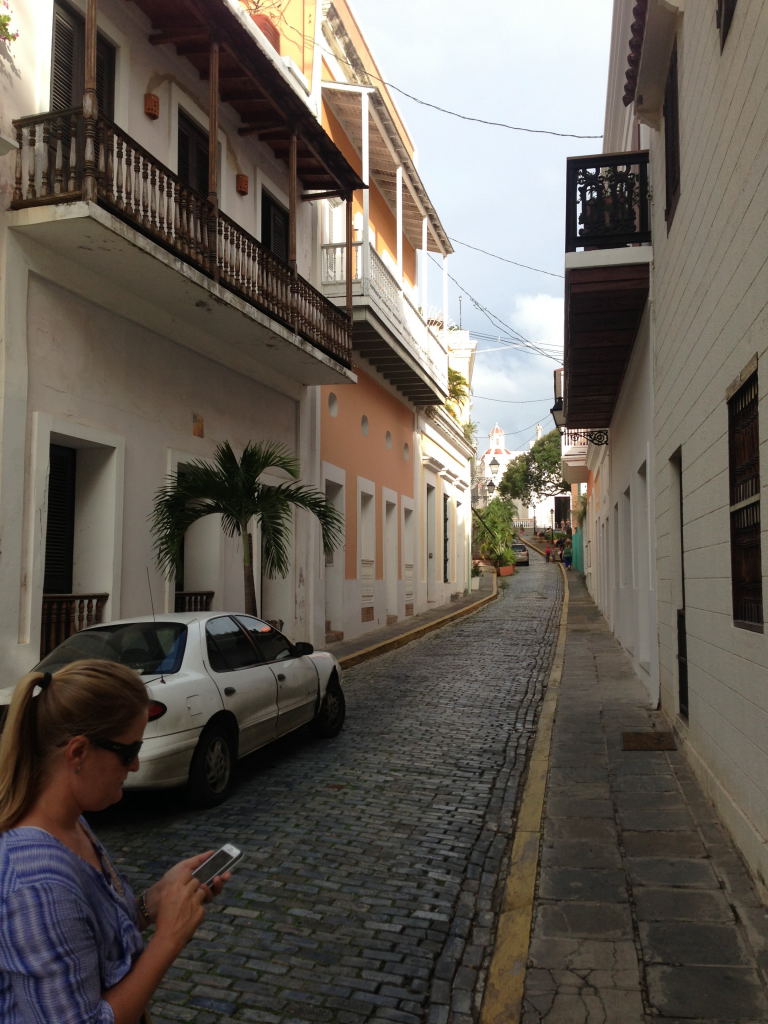 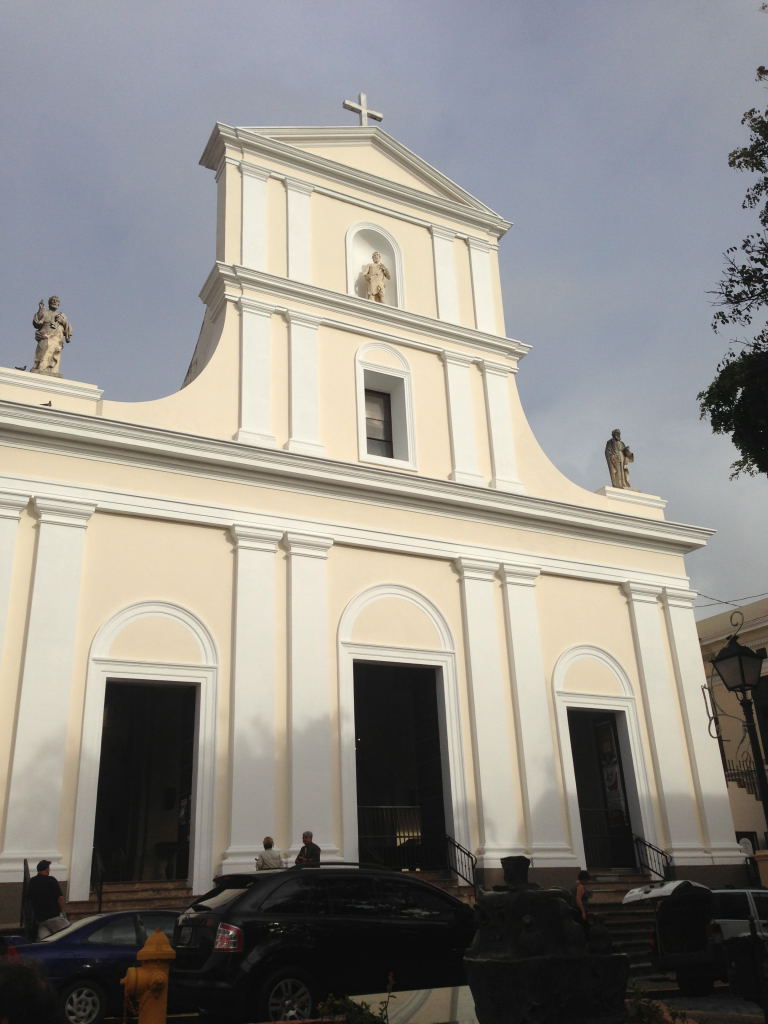 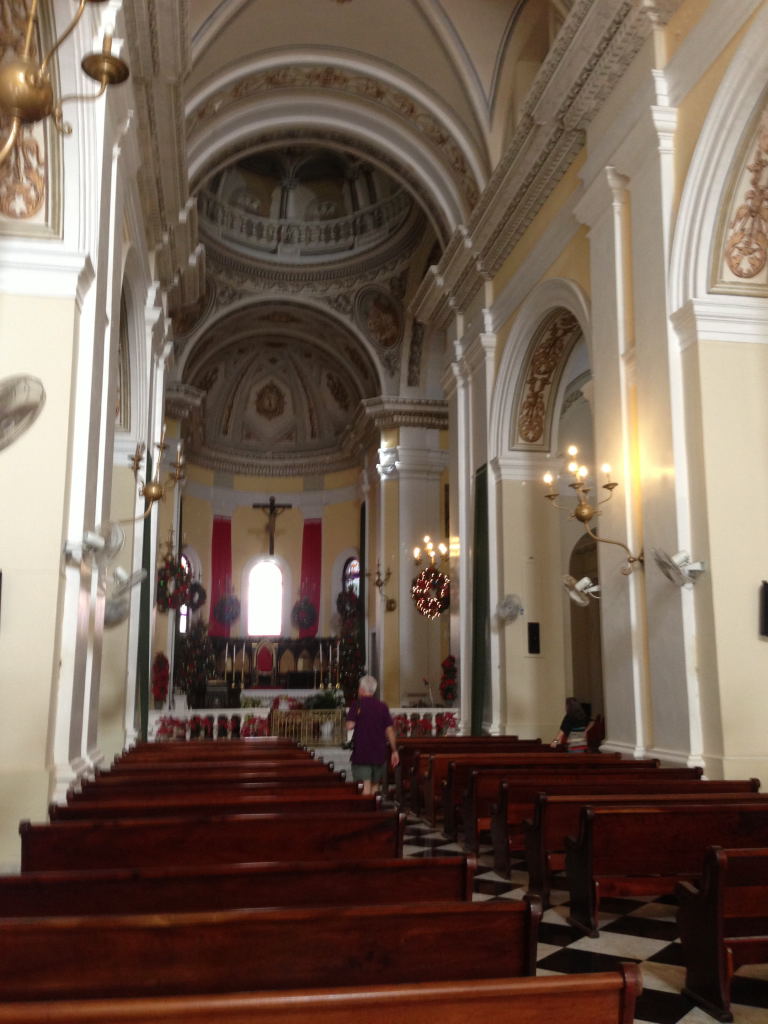 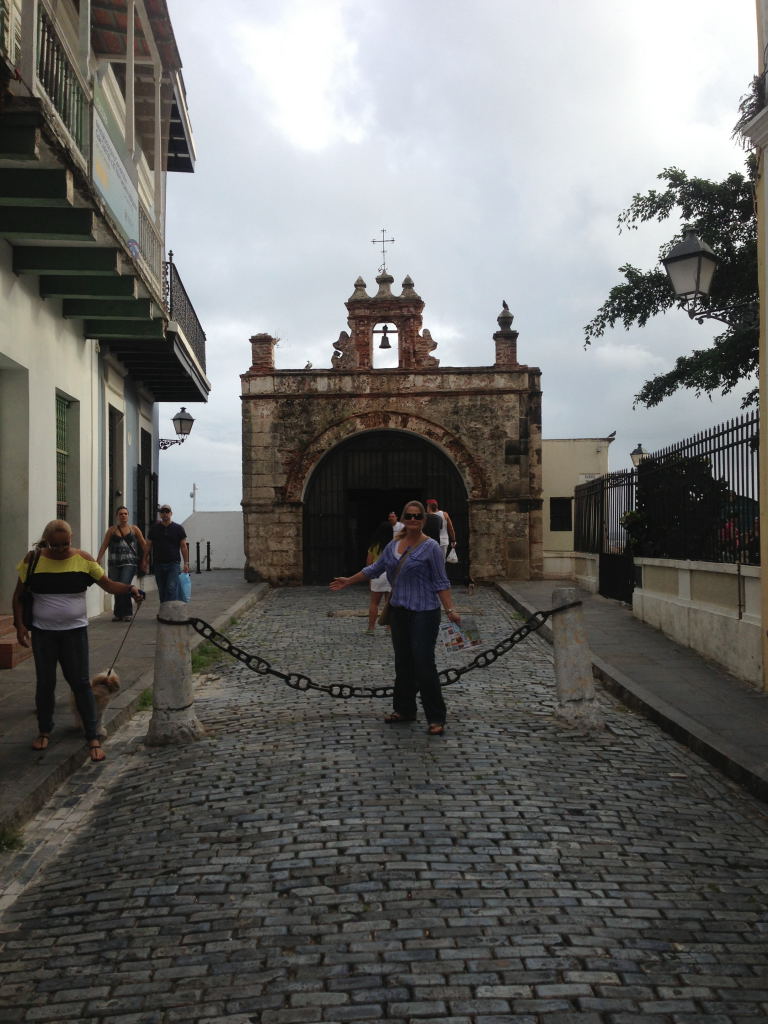 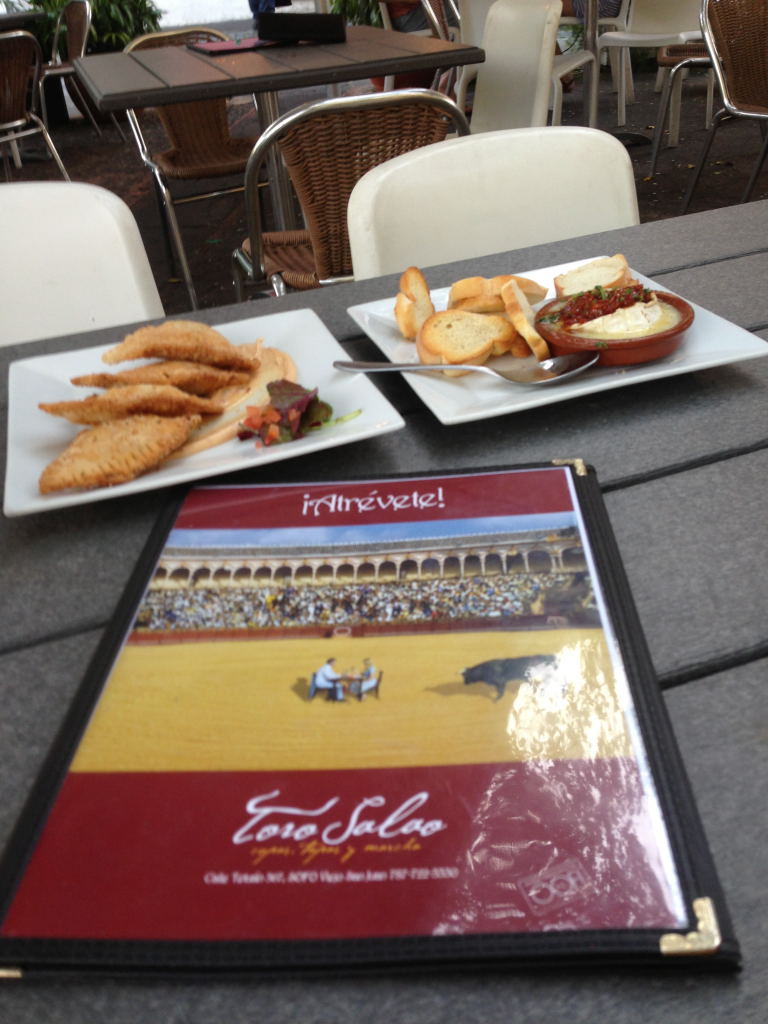 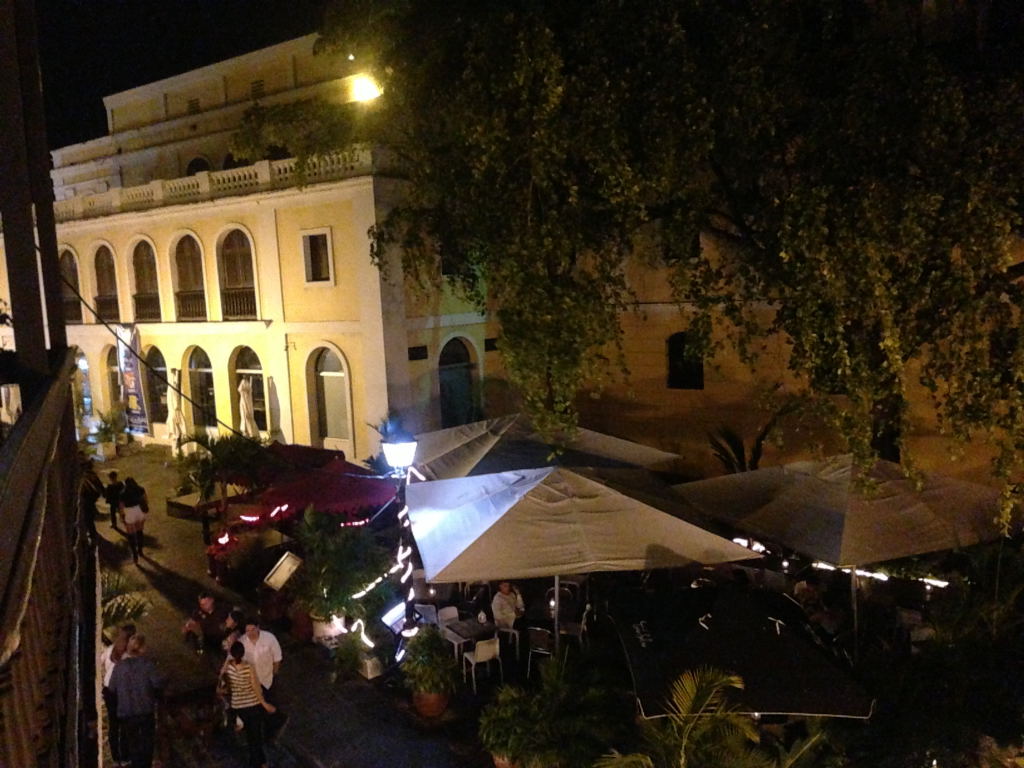 Time to go watch the NFL Playoffs, Denver vs Ravens. Found a little sports bar called Brick Haus Sports Bar. Hung out with the owner, Bob, who is originally from Panama, another place we have visited! Bob was great, tried some other PR beers. Then tried his wings! Awesome! He is talking about opening a Brick Haus here in St Thomas, I wish he would as our sports bars here are Eh? 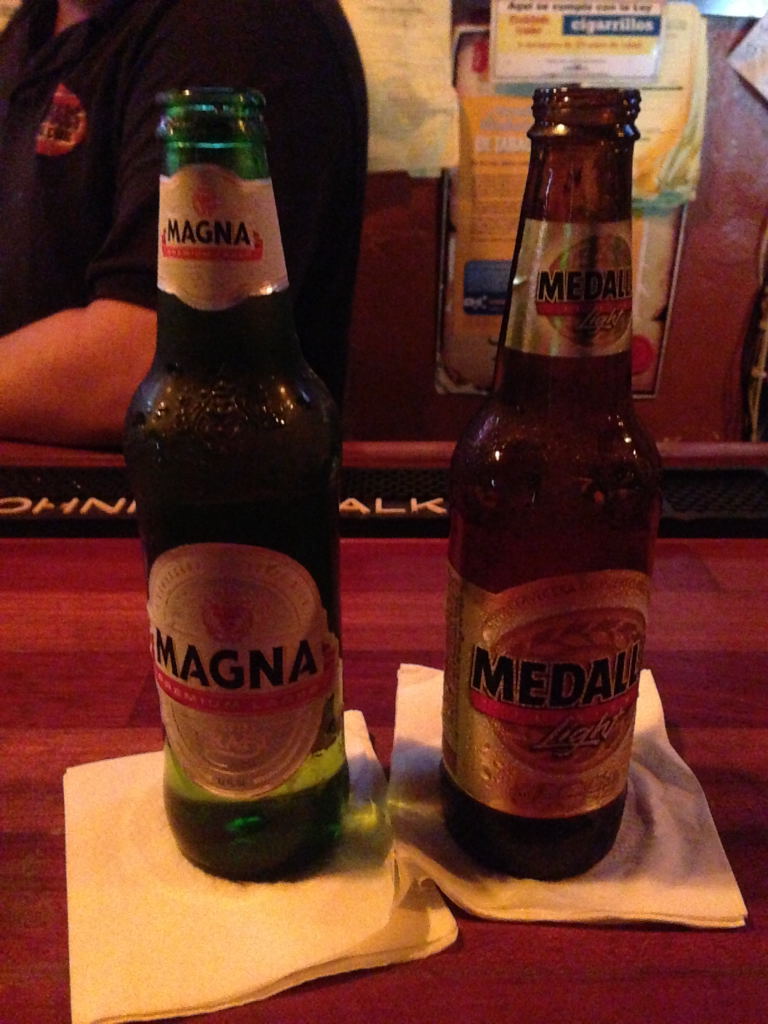 Well the game went on into overtime and well it was 11 PM and not many restaurants are open that late.  Earlier in the day, I saw this food truck that I had a feeling was going to be good.  After a quick look on Yelp, it got good reviews. It was on the way to where the car was parked. So when in Rome? Tico's Tripleta! 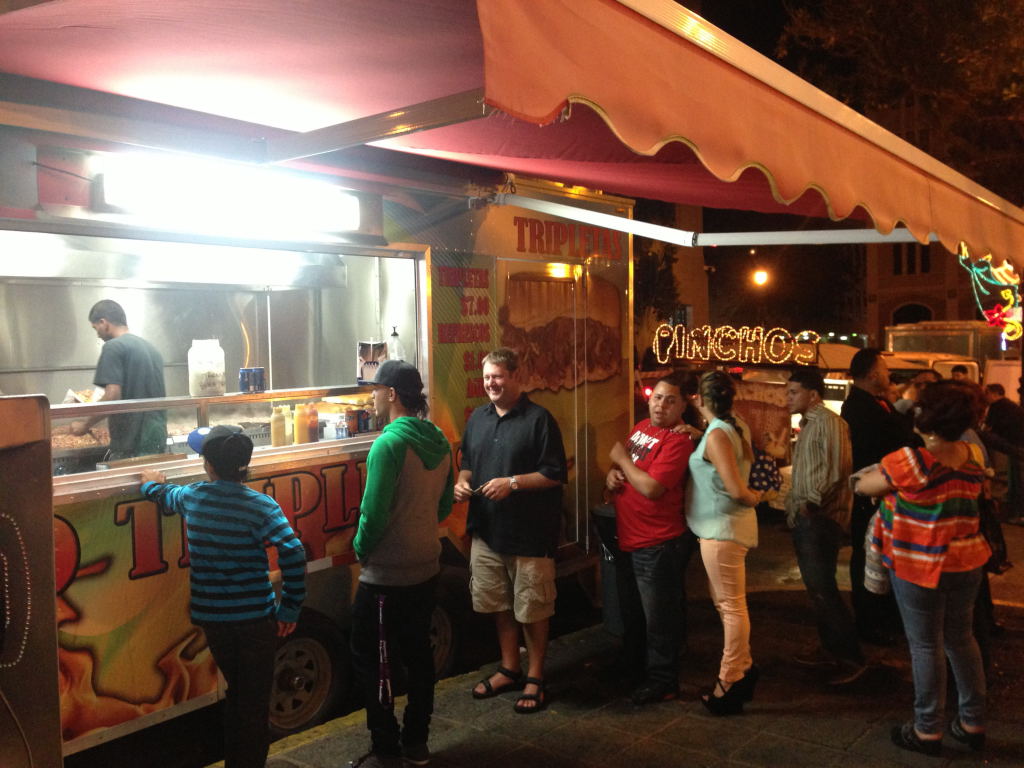 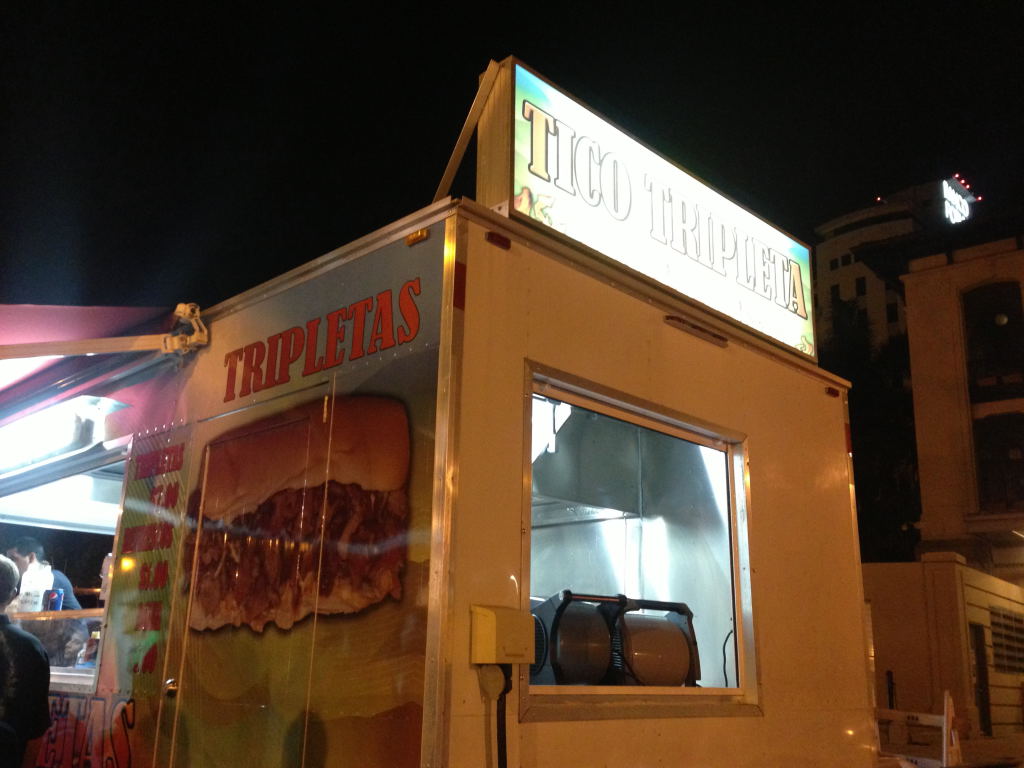 The line was 10 deep when we got there. A tripleta sandwich is a Puerto Rican favorite I guess. It is chopped chicken, pork and steak on a white hoagie roll, with ketchup, mayo and mustard. My take on it, a Philly Cheese steak meets Latino flare? We got two to go to eat at the Ritz by the pool! $7 each! 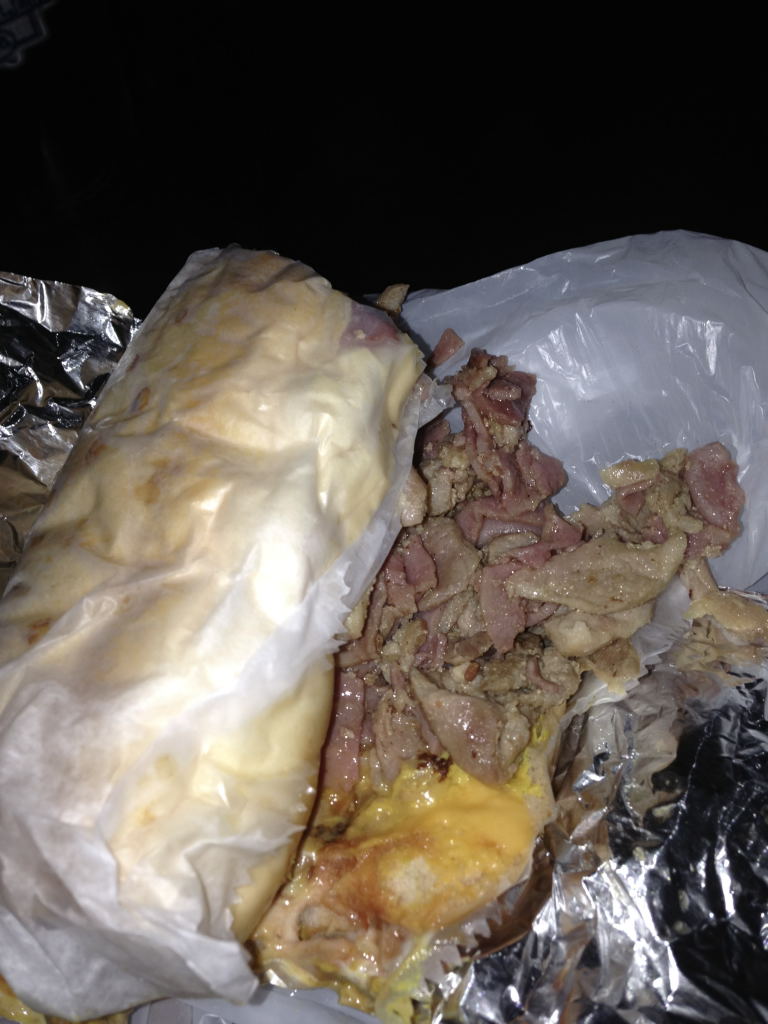 Sunday arrives, our last day in PR. We had breakfast at Denny's. Packed up and checked out. Well got the bill and they had on there $64 tab from the Lobby Bar?  Excuse me?  Lobby Bar no sandals or shorts, why would I ever go in there? I asked what the charges were, two Coors Lights and two Grey Goose?  Wow all for $64? Glad I didn't go to the Lobby Bar! Thanks Ritz, would never have spent $500 for night there, place really needs a re-model, but at $125 was perfect!

We were thwarted the night before with going out to dinner to get Monfongo, another Purto Rican dish. I guess we ended up being rewarded instead though with Tripletas!

There was a good restaurant by the Ritz that had good Monfongo, so off we went for lunch. 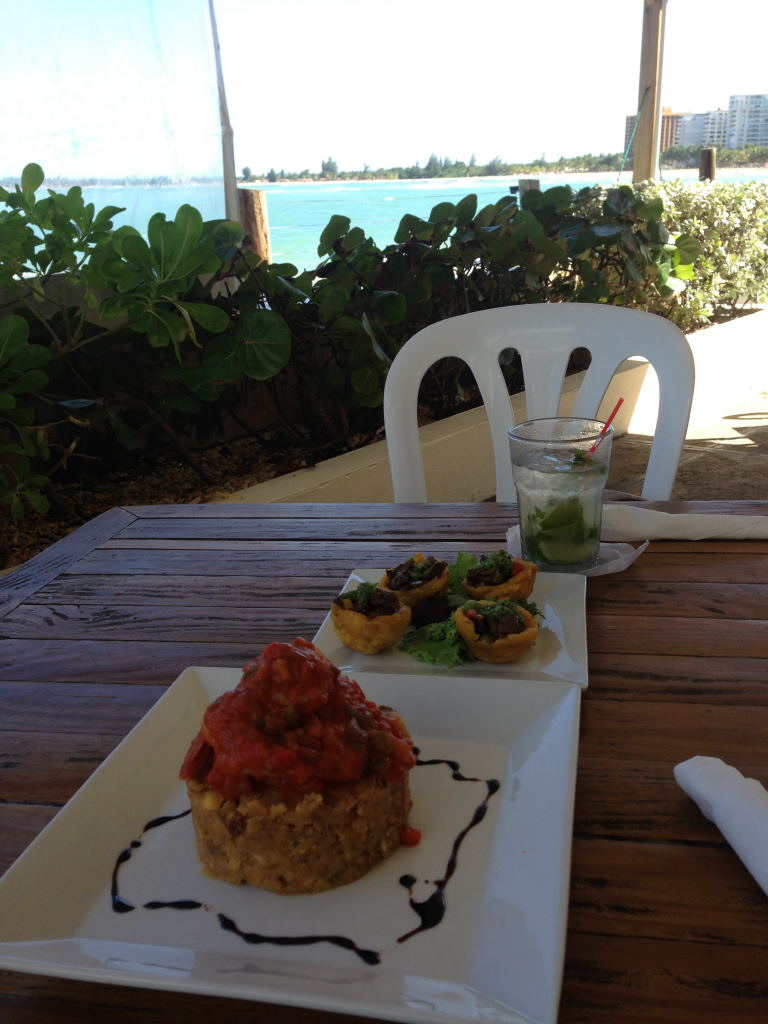 ﻿
﻿Monfangos! Crushed plantains with glops of meat on top! We had the Shrimp and the mini beef ones! They were excellent! And of course a Mojito to go along?

Time for 4 lane driving and my kind of shopping!  Super Wal-Mart, Taco Bell and Costco. We brought our insulated freezer bag with the blue ice packs (the other reason we needed the fridge at the Ritz?). To get there across a 4 lane bridge and into the real neighborhoods! Um the bridge had a toll! The neighborhoods reminded me a lot of Mexico, not really a US Territory!

Got to Wal-Mart, it was JAMMED! Got our cereal, canned soups, shampoo and other items that are just too much in St Thomas (cereal $6, canned soup $3).

Here I am putting them into our freezer that night! 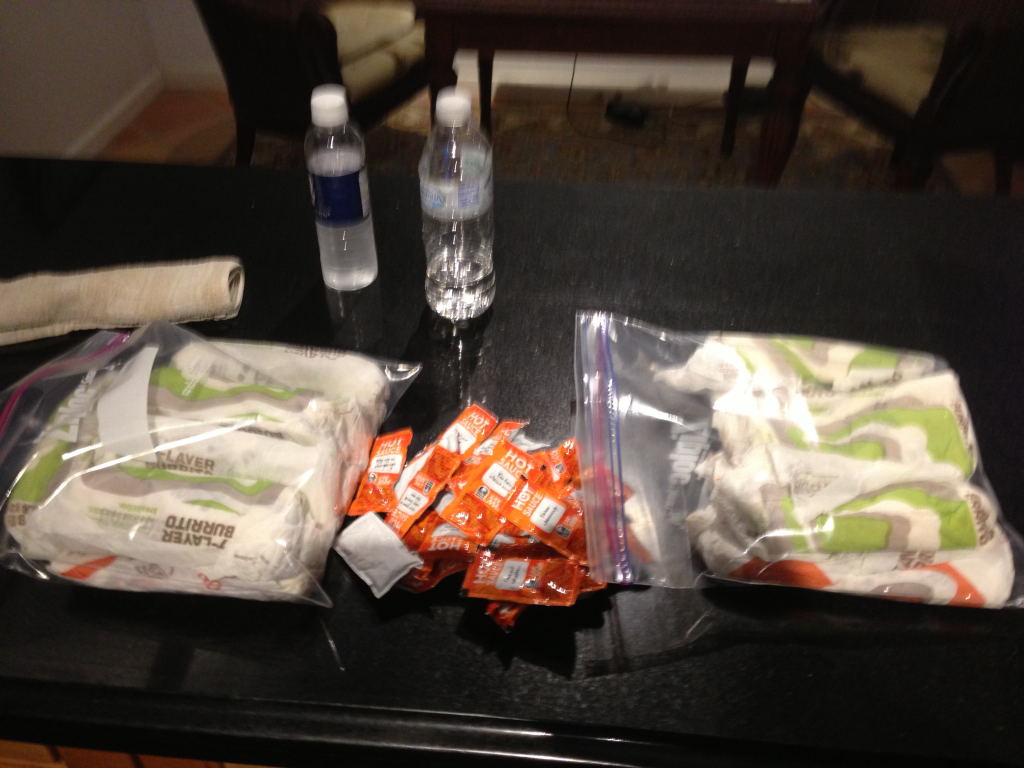 Last stop before the airport, Costco! 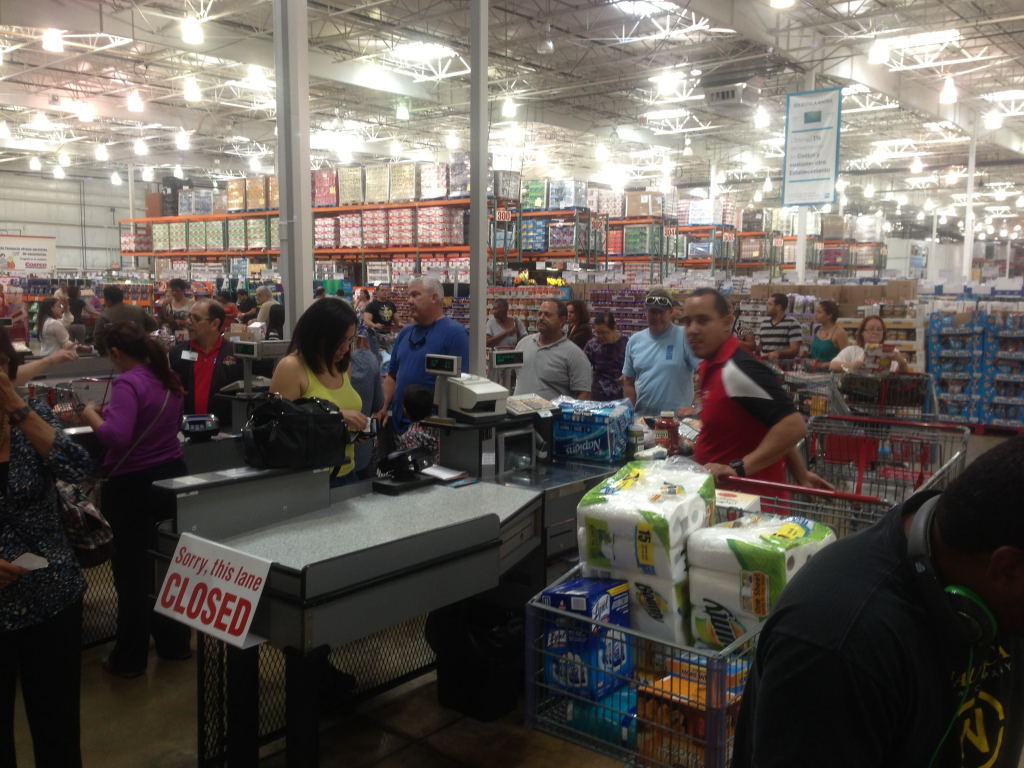 Yes that is right, in St Thomas, good steak is hard to find, and the ok steak is expensive, $22/lb of filet and $18 for ribeye. Costco to the rescue! Two packs of filet - $12.99/lb and one pack of ribeye, $8.99/lb. We also got the Kirkland Pesto sauce, Costco chocolate cookies and bagels and some other stuff. What we did notice while we were in PR, they don't drink coffee (no real coffee selection at Costco) and no vegetables with dinner.

Now it is off to the Airport for our flight back to St Thomas and after that shopping experience I was ready to get back to our Island Paradise! Back on to the now SIX lane freeway and drop the car off. Checked our food in and through security, one last Medalla? 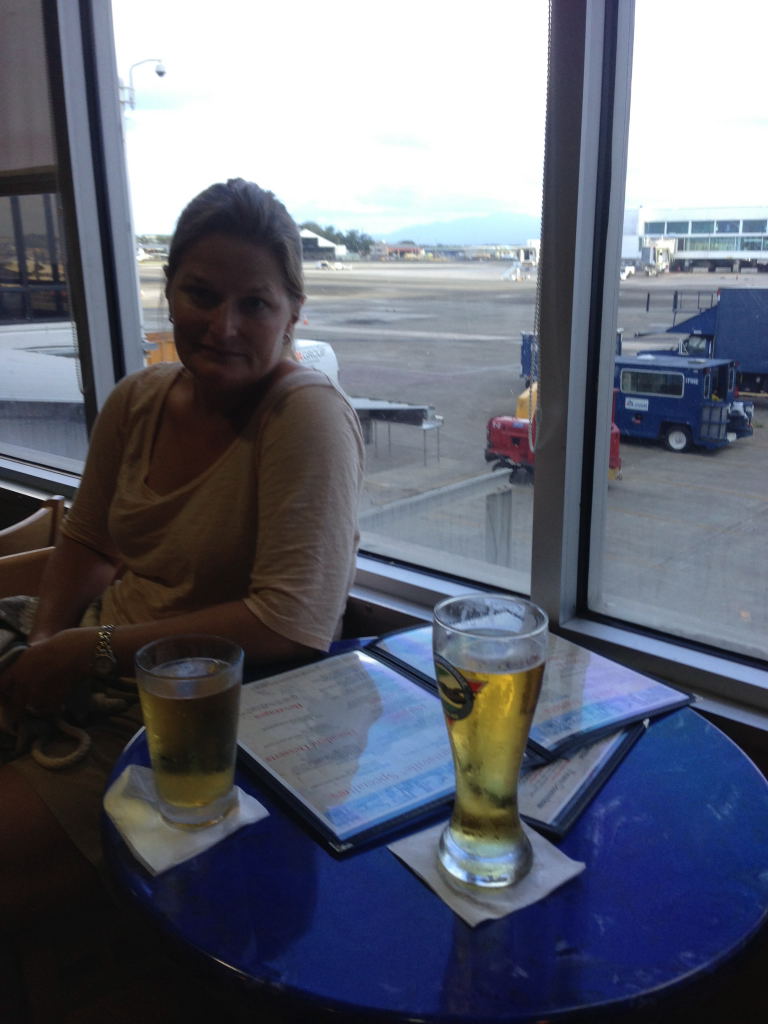 So you can see that curing "Rock Fever" can be as easy as this!  And to keep that bug at bay, here is what I did the other night! 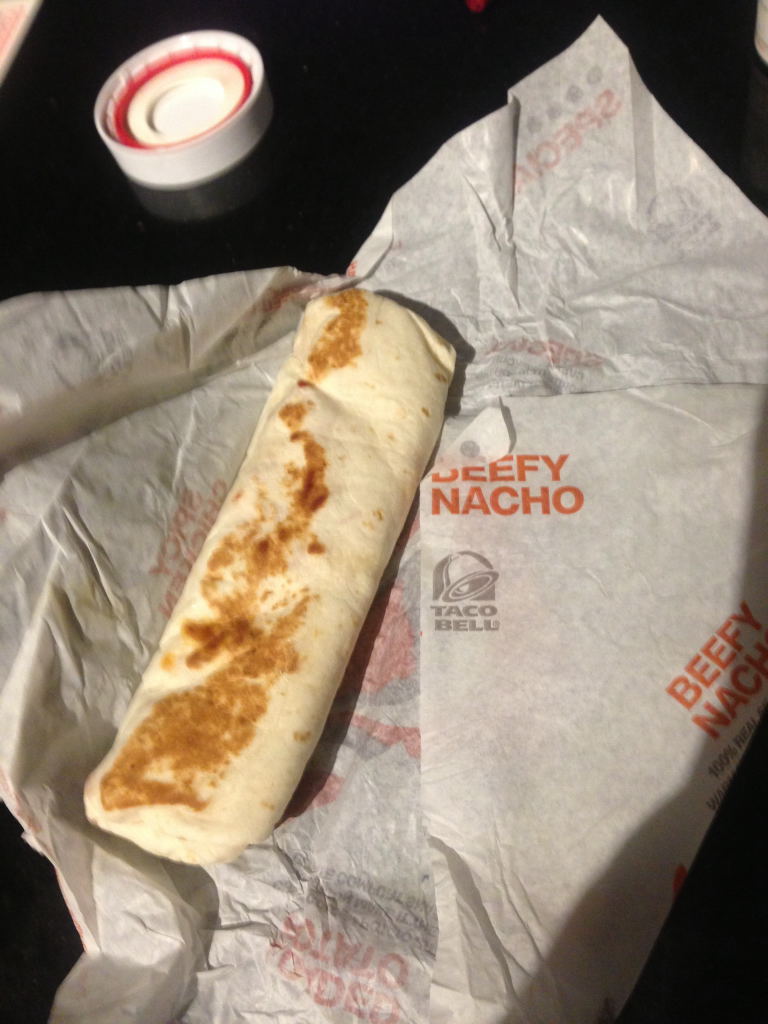 Easy to Buy a Home in the US Virgin Islands?

So I am back to doing residential real estate, just not in Reno, NV, but in paradise on the Island of St Thomas in the US Virgin Islands!

Check out my real estate webpage: www.ken-wiseman.com. From there you can search the MLS and see what we have going on here!

Here is an article I wrote for my real estate blog about how easy it is to finance a home here:

Well what about financing? Yes, financing here is just like the states. We have all the same financing programs here in the US Virgin Islands. Buying a home here now is easy than ever before, especially with the low interest rates and higher loan limits.

Interest rate (estimate only as rates change daily but here is the latest rate) 3.4% APR

30 year loan payment a month of $1617.82 (does not include property taxes or home owners insurance).

FHA requires only a 3.5% down payment. The home must be a primary residence and a credit score of 640 or better.

30 year loan payment of $1915.08 (does not include property taxes or home owners insurance).

VA loans are zero down loans and must be a primary residence.

30 year loan payment of $1984.54 per month (does not include property taxes or home owners insurance).

So as you can see home financing here in the US Virgin Islands is easy and with reasonable payments. These interest rates are at historic lows and eventually are going to go up. There is no better time than now to buy a home a now with low home prices and low interest rates? In 2-3 years, ask yourself if waiting to buy a home was a good idea?

Many people that I know that live here full time on the island are paying $2000 - $3000 a month in rent for a nice home. Sometimes those homes have a downstairs apartment too, which would rent out for $800 - $1000 a month. Take that income and subtract that from your FHA loan payment of $1985 and you would be living in a home that you own for only $985/mo, or about half of what you are paying your landlord?  Do you think that it would make sense for you to own rather than rent?

If it does make sense for you to own here in the US Virgin Islands, contact me today!

Best Beaches in the World - US Virgin Islands makes the list!

These beaches are in my back yard, my personal favorite is White Bay, Jost Van Dyke, BVI, although having Megan's 10 minutes down the road and we look into Trunk from out patio isn't too bad! :) 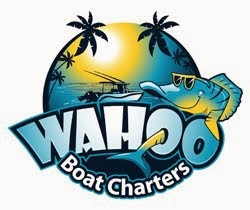 Snorkel the Islands On Your Own Private Boat